While the rest of the world was (and is) still in the throes of the global pandemic, China and Japan are over the hill for the most part, so fashion insiders and lovers everywhere are referencing the Spring/Summer season from Chinese and Japanese designers.

Spring/Summer 2021 put Shanghai and Tokyo on the map quite unexpectedly for those who typically focus more on the European and US designers. And it’s a major positive, because both countries are home to a rich cultural heritage which manifests itself in many ways, but quite visibly through clothing. A stroll through Huangpu or Shimokitazawa renders palpable the melange between Eastern style and Western details, and designers this season managed to highlight both in unique ways.

To gain a proper view of designers’ creations this past season, our fashion experts analysed fashion in China and Japan to come up with the top color and fabric trends for the Spring and Summer seasons.

One of the most popular colors next Spring and Summer is medium blue, ranging from lapis lazuli to cornflower.

For instance, Shanghai-based designer Rue Agthonis’ recent collection included pops of bright blue in otherwise neutral-toned outfits. This form of styling is present in both China and Japan — monochromatic styling is the other. Both combinations are often presented on loose silhouettes, a commonality in Asian fashion in general.

In Japan, many designers are opting for medium blue tones as well. Hare leans on the side of teal, Hyke on that of royal blue, and Ihnn on steel hues. Interestingly, while runways seem to most heavily feature dresses and tops, Instagram’s street stylers step out in pants.

In both China and Japan, this color is expected to experience a modest growth by Summer 2021: +13% and +8% respectively. This isn’t so much of a surprise considering the propensity of the color, a nod to its universal appeal especially in Japan, where all 3 consumer segments are fond of the color.

Similarly to what we’ve noticed among European designers, white is a crowd favorite in China and Japan. Designers seem to favor monochromatic white looks as one of the most common stylistic choices for the color.

With that said, designers are proving that there are no limits as to how white can be worn: in Japan, Tokyo-based brand Ihnn pairs white with pops of color, and in China, fan-favorite Angel Chen goes for streetwear royalty in her quirky white looks.

White will rise by a mere +1% in Summer 2021 in China, particularly among less mainstream consumers, likely due to the daring designs put out on the runways. In Japan, white will rise by more in the Summer at +7%, though the color will hold a wider appeal. In both places, tops are the overwhelming winner in white. From Yuhan Wang, to Kira, to Cinoh, consumers are in for a bright-white Summer. 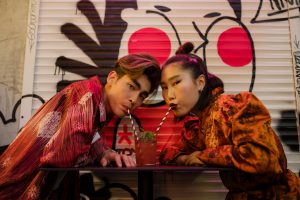 The favorite fabrics of China and Japan Fashion Weeks

Taffeta will be one of the breakout fabric trends of the season, which may come as a surprise considering that this fabric has quite a formal association, especially in Western countries. Nonetheless, similar to European fashion, designers are experimenting with this lustrous fabric in new ways, proving that taffeta can indeed be worn casually.

For instance, for Tae Ashida, Angel Chen, and Shushu/Tong, a-line dresses are one of the most popular silhouettes in taffeta. The fabric’s stiff shape lends itself well to voluminous silhouettes, which helps to explain the preponderance of skirts and dresses in China and Japan.

And the term breakout trend is no exaggeration: this Summer 2021 in China, taffeta is predicted to rise by +23%, and in Japan, by +13%. Designers indeed testify to the appeal of skirts and dresses in the fabric: Ming Ma, for example, creates roomy, feminine dresses in taffeta for the Spring and Summer.

Similarly to taffeta, muslin can range from delicate and sheer to coarse and noisy. Consequently, muslin is one of the most popular fabrics for the Spring and Summer seasons. The versatility of this fabric renders it fitting for any silhouette, from casual to formal attire, and designers haven’t missed the opportunity to experiment.

However, muslin is predicted to behave quite differently depending on the country: in Japan, the fabric will burst in Summer 2021 at +36%, and in China, there is no change in visibility compared to last year.

For instance, Japanese designer Chitose Abe’s recent collection for Sacai flirts with muslin’s versatility, creating near-androgynous looks by combining menswear tailoring with feminine details. In a similar vein, Rito’s SS21 collection has gone full oversize, and the virtual debut of the collection gave viewers the impression of swimming in fabric among the industrial-like trees on set of the short film. No matter the designer, dresses and skirts will rule muslin in China and Japan.

What we can expect from SS21 in China and Japan

The top trends in China and Japan are paradoxical, in that while some trends exude calm minimalism, others exude vibrant expression. White, for instance, is a classic color that has been adopted by edgier consumers, while lesser-known muslin holds a universal appeal.

We’ll be keeping an eye out for Chinese and Japanese trends as the new year unfolds. Trend forecasting can provide a fresh perspective on upcoming trends, particularly during a time in which the industry is so uncertain, and in which Asian designers are drawing so much attention globally.